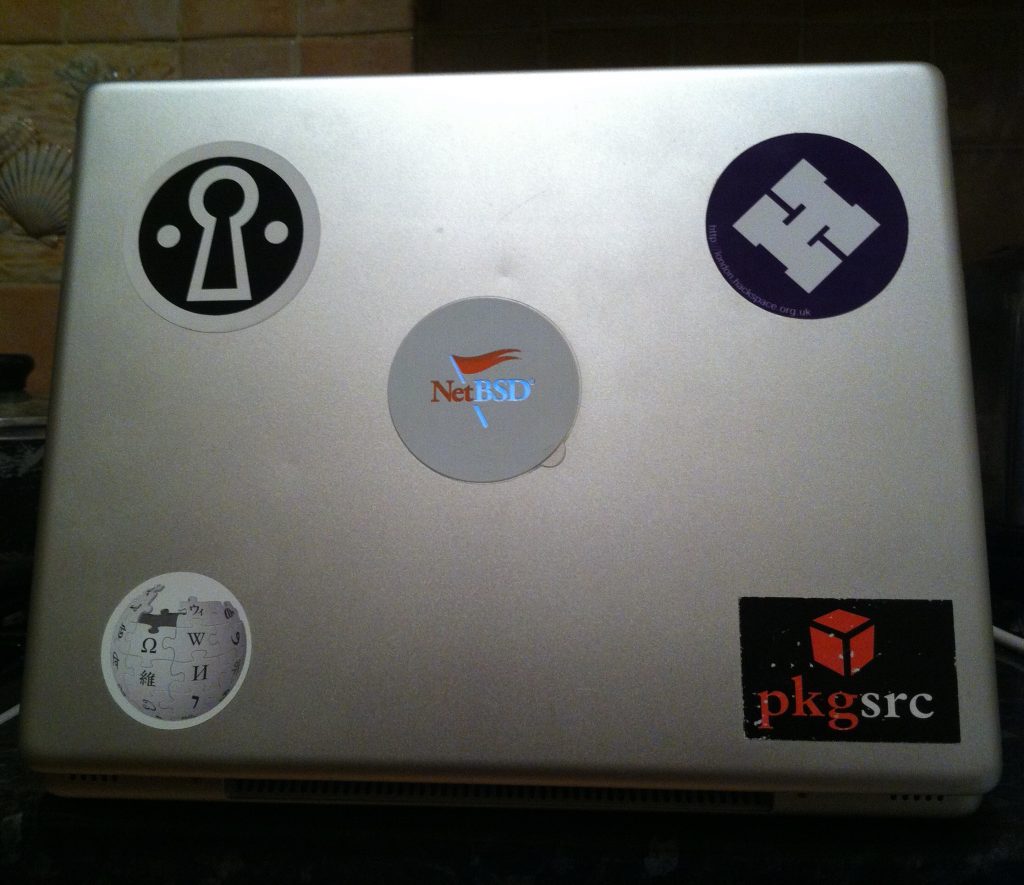 Preparation for a trip started off a little earlier this christmas. I planned to take my PowerBook on the road with me to Hamburg for 33c3. Previous attempts to use this machine as my primary system on the road in the past had been thwarted by leaving too little time to build & prepare before departure.
The system has been dual booting NetBSD & Mac OS X Tiger for some time now, recently I’ve been doing almost daily upgrades to NetBSD-HEAD on the system using the generated iso images from NYFTP.
My plan was to get the machine installed with a current build FireFox on NetBSD & bring the existing installed packages up to date. I managed to update the existing packages without any problems but it didn’t look like FireFox was going to build successfully. The package as-is currently in pkgsrc does not build on NetBSD/macppc. I was pointed to a patch in pkg/48595 which was pending commit and required testing. It cleared up the initial issue I ran into but the build still failed (see previous link on updates about the failure), though it took a little longer to fail in the day. After several days of failed build attempts I made sure I had an up to date copy of TenFourFox installed on Tiger and settled for Dillo on NetBSD instead.

My usage of Dillo stayed somewhat basic during the trip, despite having the Mozilla certificate bundle installed, I could see any obvious way to point Dillo to it & have it use it. Hence, any site using SSL I visited generated a certificate warning. Perhaps the config should’ve been done in wget? 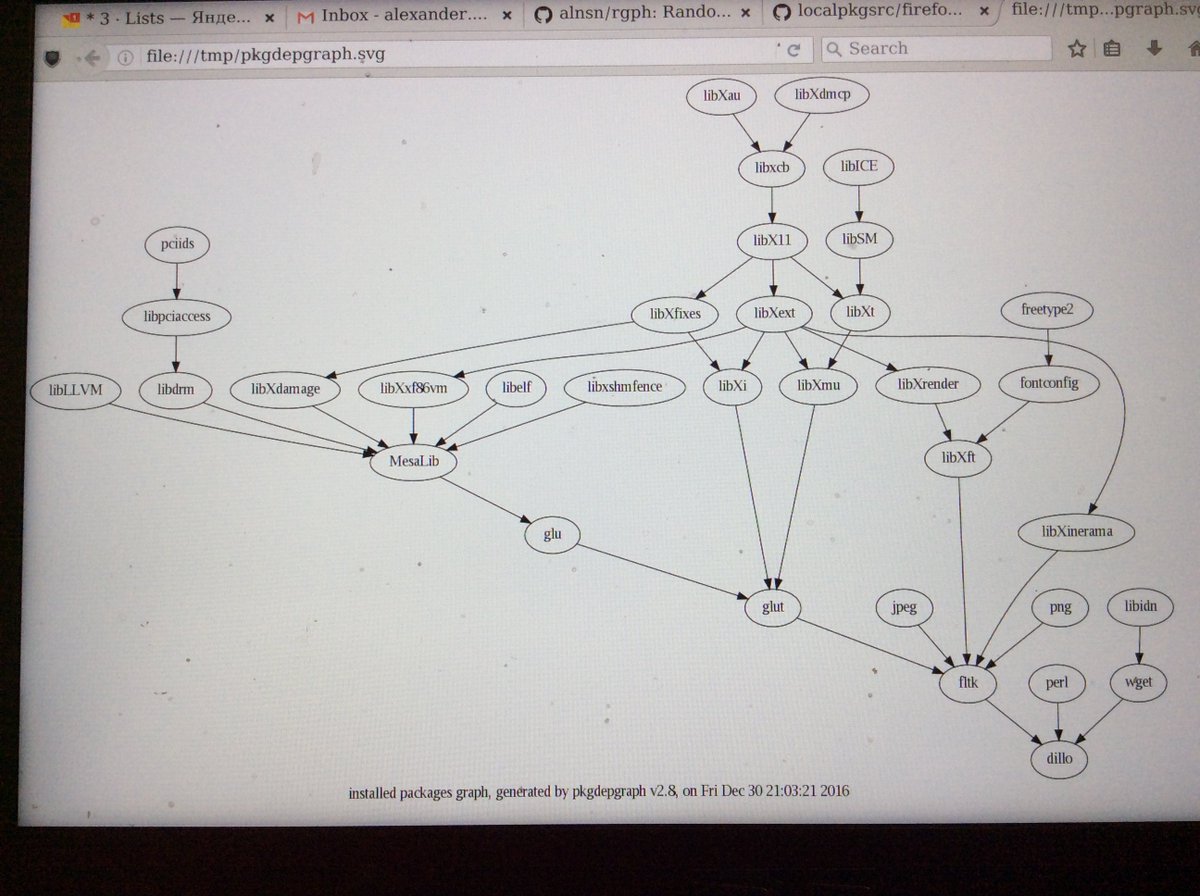 Alexander Nasonov created packages for Dillo & Links-gui targeted for running under a minimal chroot but I did not get around to trying them out. There are chrooted browser packages for other browsers in his pkgsrc github repo. The screenshot above shows the www/dillo package’s dependencies, generated using pkgtools/pkgdepgraph

Moving on, the AirPort Extreme card in the laptop is based on a Broadcom chipset which has a flaw, it’s incapable of addressing memory above 1GB (30 bits) which means the driver needs to care for that or else the card doesn’t work. This is not unique to this Broadcom chipset, the BCM4401 10/100 ethernet interfaces which use the bce(4) driver also suffer from the same problem (unable to address memory allocated above 30 bits), the BCM580x ethernet interfaces which use the bge(4) driver suffer from not being able to address more than 40 bits. Going back to the wireless chipset, the bwi(4) driver which is used in the BSDs, originated from DragonFly BSD. This driver was put together by Sepherosa Ziehau using the documentation from a reversing effort in the Linux community. The bwi driver was then imported in to Free/Open/NetBSD and was eventually removed from DragonFly BSD. A new wireless subsystem was introduced in DragonFly which required change to drivers to work again and the bwi driver was never adapted. It now lives on in the other BSDs. 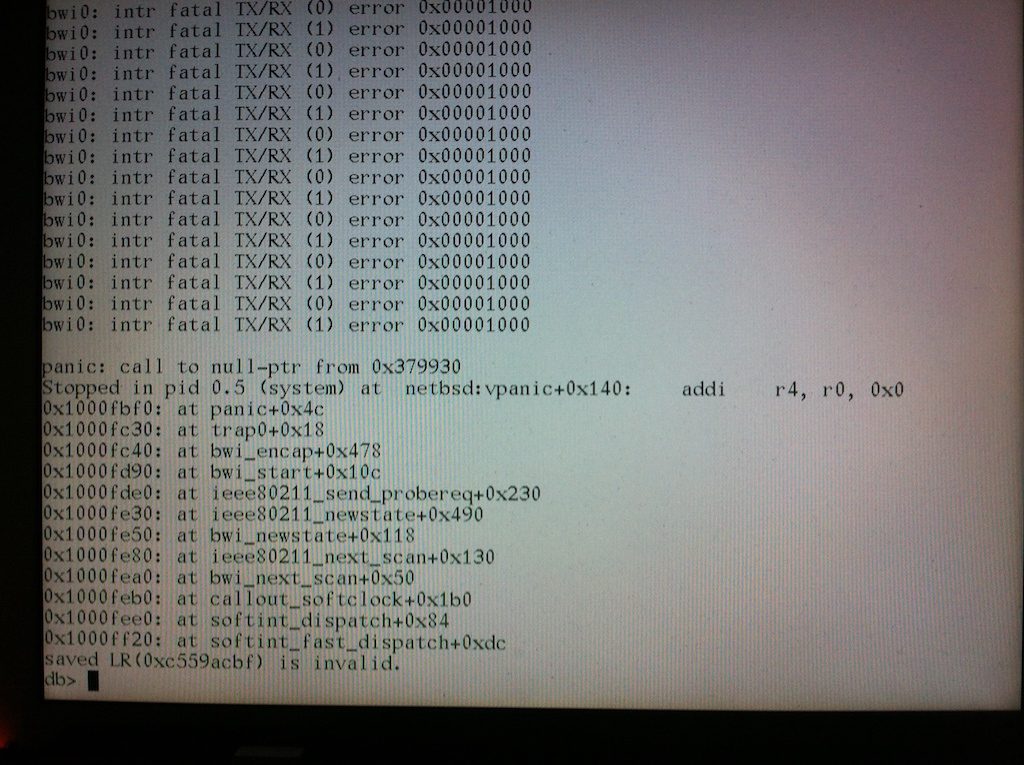 The version of bwi(4) driver came to NetBSD from OpenBSD, ported by Taylor R. Campbell back in 2009. At the time neither version of drivers could handle the 30 bit bug so you either ran with less than 1GB of RAM or used another card. In 2014 Stefan Sperling committed a workaround for this in OpenBSD. I wanted this fix in NetBSD so my wifi could also work & asked the NetBSD developers if such a change was appropriate in NetBSD. I was introduced to bus_dma(9) and the bus_dmatag_subregion() function, the bce(4) driver was my reference on how to use the function. Looked fairly straight forward, a single call this function and off you go, wasn’t too sure how it would fit into the bwi driver but I thought I’d have a go.

This was one of the things I was hoping to work on during my trip but It turned out to be the only thing I attempt. I happened to meet Stefan at 33c3 and we discussed the driver, the work around and the mighty days of the past when Damien Bergamini was hacking on the OpenBSD WiFi stack. In the OpenBSD driver Stefan had opted to deal with the issue of allocating memory in a specific region directly in the driver rather than adding a new interface to the kernel for  such a task so with a bit of thought about the past and a review of the driver, I was given a diff of the changes and suggestions about where I could start making changes.

I still don’t know yet if it’s possible to lift the changes from OpenBSD and apply them to the NetBSD version of the driver, because the DMA framework is different between the systems.
Partially implementing the change Stefan made without all the bounce buffers he’d added in the OpenBSD driver didn’t work and using the bus_dmatag_subregion() function didn’t work either. I pursued the bus_dmatag_subregion() path during 33c3 and didn’t get anywhere. At this point I started looking deeper in the system by looking at the implementation. It was at this point that I discovered this function was defined to EOPNOTSUPP on PowerPC based systems. No matter what I had tried with this function it was a waste of time^W^W^Wvaluable learning experience about keeping documentation up to date & consistent.

At this point I started looking into adding support for tagged subregions so I could make use of the function. The implementation is fairly simple, a public function for a developer to use which performs various tests and a private function which is called to deal with the memory allocation. Unfortunately there were some missing members from the data structure on the powerpc side of NetBSD which needed further investigation and I stopped there for the time being.

For the trip I relied on a tiny Realtek RTL8188CUS based wifi adapter to get me network access. The card worked on the 802.1x enabled SSID at 33c3 using wpa_supplicant(8) on NetBSD/maccppc.

The driver for this card is now enabled by default in the GENERIC config file for NetBSD/macppc along with a group of other drivers for USB peripherals.

Thanks to Stefan for his help and advice with the bwi driver and Alex for the chrooted browser packages! 🙂 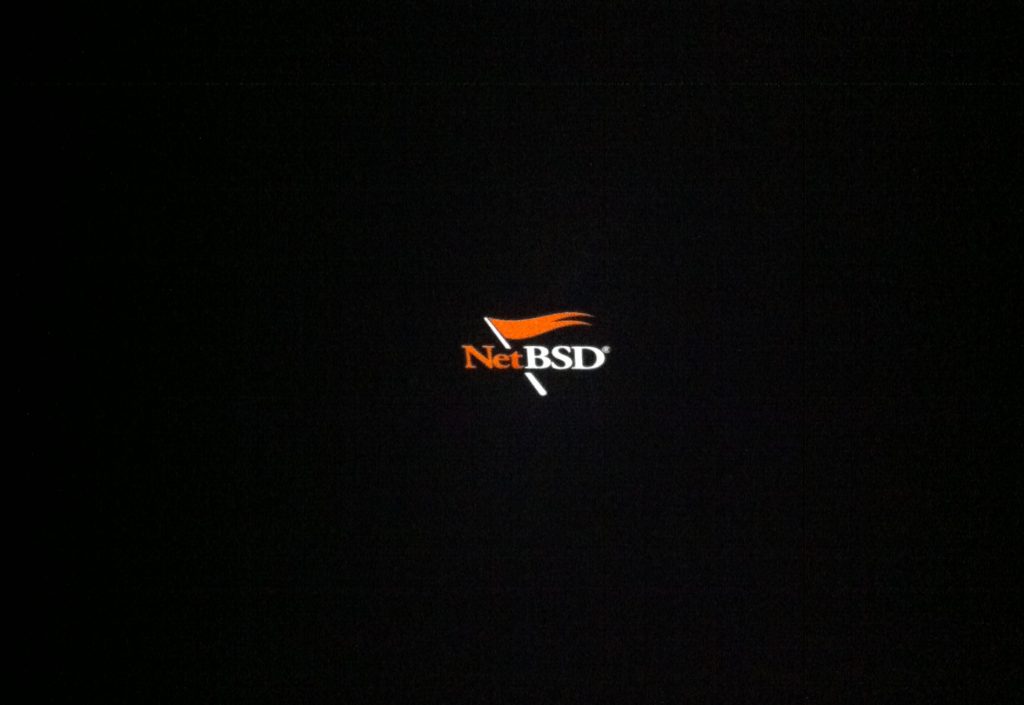 The odyssey client adds WPA & WPA2 support to wireless clients running Windows prior to XP. You can download a trial version here

A few years too late 🙂 but anyways, If you’ve got any old Orinoco based chipset cards that you’d like 128 bit WEP encryption on you can use a tool called alchemy to mod the firmware so the card is ID’d as a Gold card, then reflash the firmware to have full 128 bit wep.

You can grab a copy of Alchemy here or here

Then use the Agere firmware flash util filename wsuags454c-872.zip to reflash the card (as It’ll flash just about any Orinoco based card), grab a copy of the tool here