Windows supports the Dvorak keyboard layout natively, out of the box, so there is no tinkering required outside of visiting control panel & selecting the desired layout.

To switch the location of the control & caps locks keys however, you need to modify the registry & and reboot. I’ve uploaded a registry snippet which can be applied (taken from Windows 7). It implements the changes covered in a post on kodiva.com.

Each of the major BSD’s have a different way of handling keyboard layouts on the console & X11. On OpenBSD X11 inherits the setting from wscons by default, on FreeBSD the console keyboard config is separate to the X11 config & depending on if you go down the hald route or not, you may find yourself writing XML to configure your keyboard. For NetBSD which I’ll cover here, wscons configuration is again separate from X11 configuration but everything is configured as per usual via the xorg.conf keyboard layout.

I didn’t know about the ctrl:nocaps option and I happen to stumble across it in the X section of the NetBSD guide.

To apply the same layout to the console, edit /etc/wscons.conf and set encoding to us.dvorak.swapctrlcaps followed /etc/rc.d/wscons restart.

I can't believe your Caps Lock key hasn't been remapped yet.

Not sure how hipster this all is, managed to get sidetracked into NetBSD desktop config as I was working on updating a package in pkgsrc and remembered the tweet above. Seems like a common thing in the emacs world.

Since getting a MacBook Air with a Japanese keyboard, I have grown accustomed to having the control key in place of the caps lock, so much so that now it’s annoying not having it there if I switch to another system. Searching around to see what I’d find on the subject, it seems that a similar frustration exists for users who are used to the left control key being in the bottom left hand side instead of the new Fn key & infact I have a bios image which makes this change for my X61s.

From the brief search for a bios image brought up lots of links to the image which I already have for swapping fn with ctrl & I didn’t fancy an introduction to ThinkPad BIOS hacking with IDA so I began to look for OS specific solutions.

On FreeBSD, a variant of the UK (uk.cp850-ctrl.kbd, uk.iso-ctrl.kdb) & US standard layouts (us.pc-ctrl.kbd) exist which swap the location of the two keys round & I found this guide (in Japenese) which discusses what changes are needed to a layout file (reassigning scan codes 29 & 58) but all this was already taken care of some 12 years ago. The header of us.dvorak.kbd menions:

“There are some minor variations, but this seems like the most common layout. I personally use one with three more pairs swapped:
esc `~, clock lctrl, and =+ \| (supplied as “us.dvorakx.kbd“). ”

I just needed to declare keymap="us.dvorakx.kbd" in /etc/rc.conf & restart /etc/rc.d/syscons.

I’ve been using the dvorak for just under 8 months now according to the date (17/6/2011) on the printout I have pinned on my wall of the US Dvorak keyboard layout from Wikipedia.
Its been ok-ish so far, I’m used to the layout now but still prone to making mistakes, my main gripe with it is the position of the W & V keys, one slip of the finger when pasting something & you lose what you’re doing because you’ve just closed the window instead, this has happened on several occasion, usually when working remotely via an SSH session. It’s ok apart from that, just need to focus on keeping my hands still on the correct keys & letting the fingers do the work rather than move my hands around the keyboard.
Scrolling through the Dvorak simplified keyboard article on wikipedia, I saw a pair photos in the Mac OS section of a cordless keyboard & iBook with rearranged keys in a Dvorak layout.
I had assumed it wasn’t do-able & not looked into it further but a quick search showed it was pretty easy as this video shows.
To remove the keys from your keyboard just pull the top of the key to unclip & slide down to release, within a couple a minutes my cordless keyboard looked like this 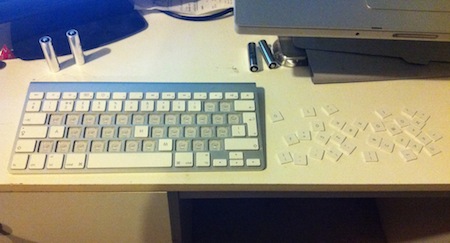 Putting the keys back was pretty straight forward & went seamlessly, sliding the keys up to place into position & pushing down to clip into place, within a couple of minutes my keyboard looked like this

As this was easy & quick to do, I assumed the keyboard on my Macbook Pro would also be the same, so began pulling the keys off, most of the keys on the centre 2 rows came off without any problems but then I reached the right hand side of the keyboard & found keys which took a bit more persuasion to unclip & it was downhill from there.

I managed to pull most of plastic clip out of the pin sockets which are used to levy them, this took a bit of fidding to get back in but I managed to do it without breaking anything which was good but as I was a little rough handed on couple of them, I managed to pull the rubber spring off the face plate 🙁 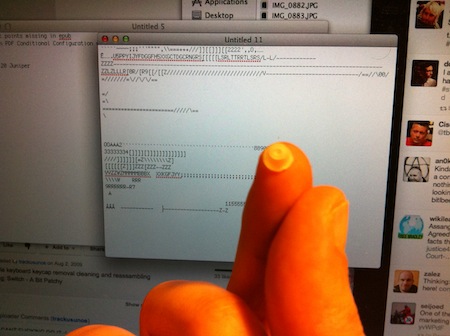 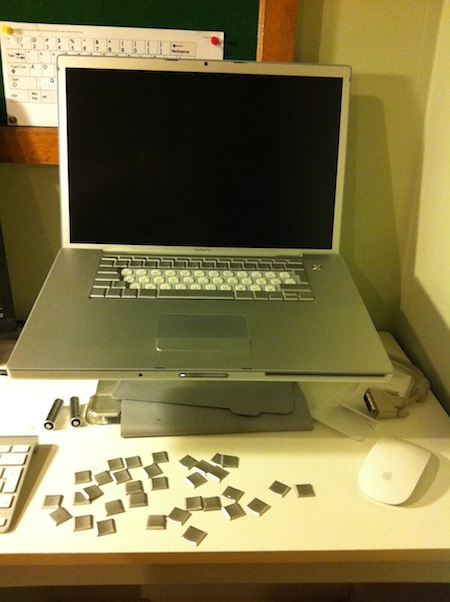 Fortunately, putting the keys back on again wasn’t too much hassle, the two keys which had their spring come off initially missed key strokes but seem ok now (the spring needs to reseat into a better position?)

I’d like to make this change on my ThinkPad keyboard too but the keys which fit around the TrackPoint have different shapes to the rest of the keys.