Time again to write up what’s been happening on the pkgsrc front since last time, this time the focus hasn’t been so much around pkgsrc on Darwin/PowerPC but more about pkgsrc in general & not necessarily code related.
At the end of the last post I mentioned a gentleman who’d been working on pkgsrc/Haiku and posting videos of his progress, I managed to make contact with him (James) & discussed his work that he’d been doing on pkgsrc. He sent me copy of the repo he’d be working off so I could assist with the aim of getting everything upstreamed as in the current state everything would need to be reintegrated per quarterly release rather than only having to pay attention if a new issue has arisen.
After getting the correct version of Haiku installed in virtualbox, I discovered a nasty bug in the Haiku network kit, it was unable to detect when the end of the file had been reached & would continue (restart?), this was revealed when I tried to download the pkgsrc tar ball from via WebPositive, ftp from the terminal was not affected however. pkgsrc bootstrapped unprivileged without issue. Hint: use the nightly snapshots until there is a newer release than Alpha 1 available.
The integration of pkgsrc into the user-land on Haiku is not currently possible due to the way the user-land is constructed, from what I understood, each Haiku package contains a piece of the filesystem, all the packages are union mounted to construct the user-land dynamically when the system comes up. That aside, with my system bootstrapped, I attempted to build Perl and ran into another bug, it seems that the library path for libperl is not populated on haiku hence perl is able to “build” but unable to run, the workaround for this in the tree I was given was to symlink libperl into ~/pkg/lib & move on. I tried various things but was unsuccessful, I believe the problem is pkgsrc specific as the version of Perl available in haikuports do not need any special treatment and the rpath is passed in correctly.
The problem was trying to isolate the required change to fix the problem, whereas in pkgsrc a policy file is passed to the build to set how Perl should be built, haikuports clobbers the source & patches in a replacement, I stopped at that point. 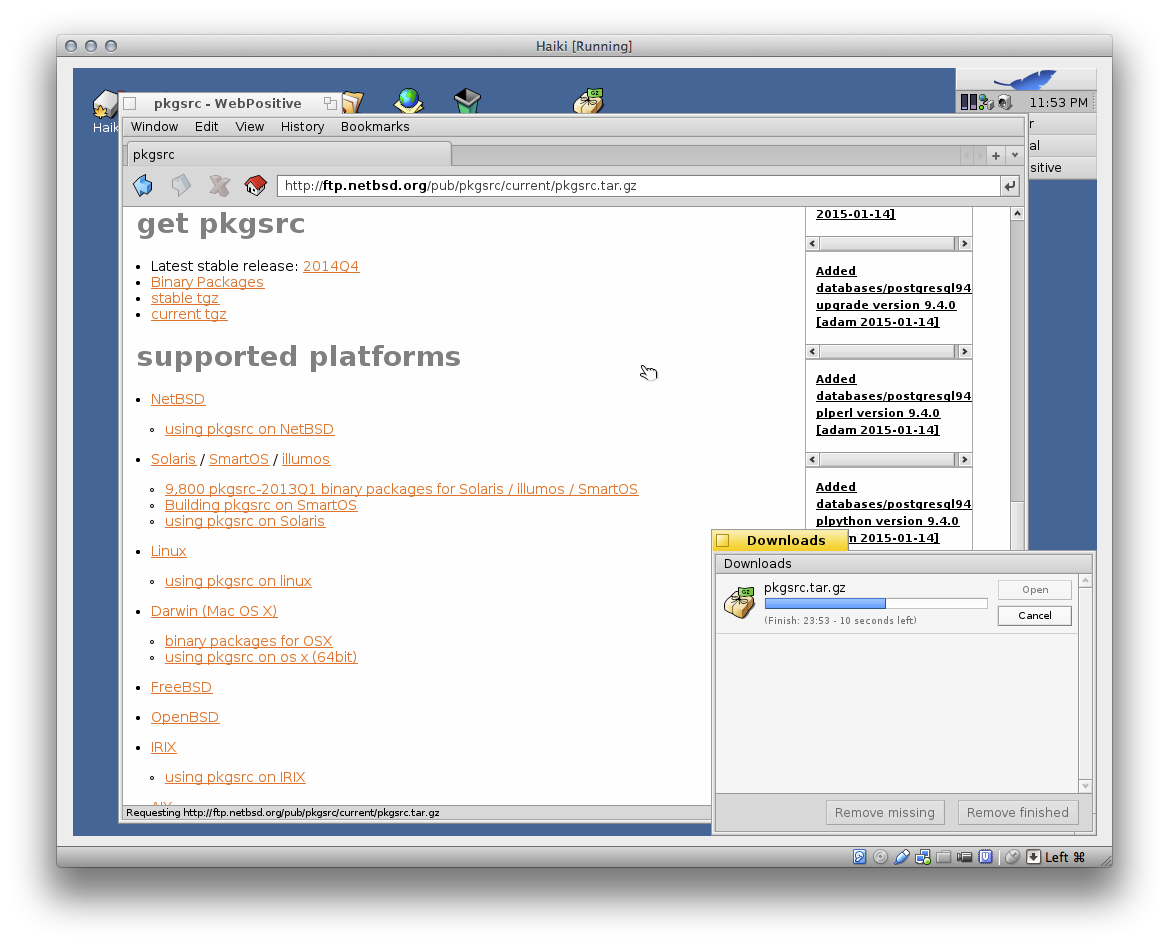 At around about this time I received the good news about the NetBSD Foundation membership and commit bit so my focus moved to reading the various developer documentation & getting familiar with processes.

sevan.mit.edu finished a bulkbulid attempt of the entire tree which took the longest time so far to complete, through all the build attempts I uncovered a new bug, the range to use for numerical IDs of UID/GID, is not sufficient to cover all the packages in the tree that need to create an account. On further discussion with asau@, it was suggested the IDs are allocated randomly and should be fixed for consistency across builds. I started doing bulkbuilds of the entire tree on FreeBSD 10.1-RELEASE and stumbled across a very nasty bug. There is a version of tcsh package in the pkgsrc tree called shells/standalone-tcsh, this is tcsh built as a static binary & set to install to /bin (the only package in the pkgsrc tree which violates the rules and places files outside of $PREFIX by default?), this ended up overwriting the system bundled version of tcsh in FreeBSD & then deleting /bin/tcsh when the package is removed, this was fixed promptly by dholland@. It was also discovered that Python’s configure script had not been changed when FreeBSD switched to elf binaries and so still trimmed the name of libraries to account for the old linker which could not handle a minor version in a libraries filename (libpython.so.1, not libpython.so.1.0). All versions of Python had been patched in the pkgsrc tree to remove this change so that it used a consistent naming convention across all platforms. After discussing this with bapt@ (FreeBSD) at FOSDEM, it turned out to be bug and should be fixed in future Python versions once the fixes are upstreamed.

Koobs@ (FreeBSD) dug out the commit which introduced the change & the bug report.

The opportunity to join the pkg-security team came up & for the past few weeks I’ve been getting familiar with the processes of dealing with security advisories & listing them so that users who fetch the pkg-vulnerabilities database are notified if they have any vulnerable packages installed. The general advisory process is a little infuriating, based on my recent experience I’d say at the top of my list are the Oracle security advisories as they do not divulge any details other than “unknown” in version(s) X, PHP for the frequency, OpenSSL for the impact. On the one hand I was quite impressed that CVE IDs were becoming so familiar that I could spot, on the fly, an advisory that had been accounted for, but on the other hand quite upset that I was using brain capacity on this. The availability of information is quite frustrating too, issues which are assigned an ID but cannot by checked on Mitre’s site take extra effort to find the necessary information to include (Mitre are responsible for allocating the CVEs!), I should note that this is from public advisories, say from a distribution. Example, CVE-2015-0240 was announced today, the Redhat security team published a blog post covering the issue, the Mitre site at present says:
“** RESERVED ** This candidate has been reserved by an organisation or individual that will use it when announcing a new security problem. When the candidate has been publicised, the details for this candidate will be provided.”
The wording & the lack of information can also be frustrating because it’s not clear what is affected. Looking at it positively, the requirement for clarification on these discrepancies means I get lots of opportunities to approach new people in different communities to ask questions.

I created a new wiki article on the NetBSD wiki to start documenting the bootstrap process of pkgsrc on Solarish, Illumos based distributions. At present the article covers what’s required to bootstrap successfully on OmniOS, Tribblix, OpenIndiana and OpenSXCE.

One thing that’s clearly evident is my workflow needs attention, at the moment things are very clumsy, involving lots of switching around but hopefully that will be addressed in the coming month. The first thing I’ve done is setup templates for emails with the correct preferences specified so that I just need to fill the necessary information & hit send, the necessary settings are automatically applied. Still thinking about how to deal with the scenario where the system that work is being carried out on is different to the system where the patch is going to be committed from, this also happens to be a different system which a developer is using. How to deal with that in as few steps from reading, say a bug report, to generating a patch, testing it & committing a fix.

For testing patches on Mac OS X, I revisited running OS X as guest on a Mac running OS X with virtualbox. Attempts in the past had not been successful & it seemed from search results that the only approach taken was to use modified OS images for hackintosh which I did not want to take. I have a genuine machine & genuine license, I shouldn’t have to resort to 3rd party images to run this. After whinging on twitter & referencing some older links I was able to successfully virtualise Mac OS X 10.7 to 10.10 in virtualbox. Will follow up with the details on that in a separate post.