Didn’t uncover anything new in pkgsrc last week as my attention was more on coreboot, I had previously been building different parts of the tree on a couple of Mac’s which where disconnected from each other & copying packages to sevan.mit.edu manually for serving, as a first off this was a good idea but bad as an ongoing thing. What ends up happening is stale packages become left behind as they are unaccounted for, luckily there aren’t too many duplicates currently but it’s something which needs to be addressed in the set of packages currently available.

There is now a page on the NetBSD wiki to keep note of issues & ideas.

To test the status of AIX support in pkgsrc I joined the IBM Power Developer Platform which provides access to Power7/7+/8 systems running AIX 6.1 & 7.1 to build software on. This’ll be my first time on a Power system & AIX, looking forward to seeing what the OS is like. 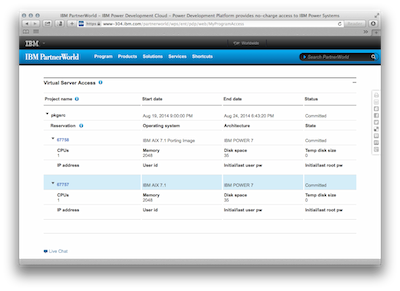 With the addition of a G5 iMac to the effort kindly donated again by Thomas Brand, I started testing builds of lang/gcc48 on sevang5.mit.edu. Next step will be to get the two systems at MIT working together to build packages once I’ve been able to get GCC 4.8 to build successfully.