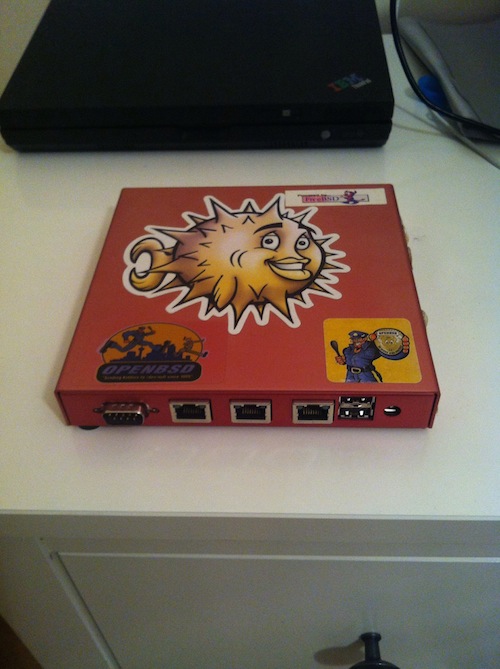 I’ve been following coreboot (formally LinuxBIOS) for quite a while but my last attempt to run it ended disastrously a couple of years back on the defunct coreboot 3 branch, requiring an RMA for a new Alix 2c3 board & the purchase of additional tools.
A ThinkPad X60s was offered up by my friendly local “old computer” pusher which I chose to try coreboot on but before I bricked that, I thought I’d try the Alix again as I was in possession of the everything needed to debug or recover the board if things went wrong.
A lot of time was wasted trying to get things built on OS X & diverged into briefly trying CentOS 7 (systemd, run away) before settling on Debian 7.6 to build on.

Selecting a board from the menu should set the ROM size as well but I was advised to double check, on the Alix 2c3 the flash chip is located under the board, my board had a AMIC A49LF040ATY-33F. 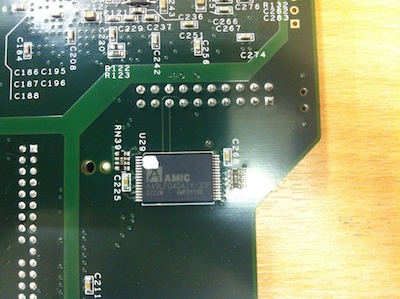 Once the image was built, coreboot.rom was copied to the Alix running FreeBSD/i386 10-RELEASE & flashed with sysutils/flashrom built from ports.
Flashrom currently assumes that there’s a device node named /dev/cpu0 and sysutils/devcpu-data offers the necessary device but on FreeBSD it’s named /dev/cpuctl0, a symlink allows you to work around the hardcoded assumption once the micro_code service has been started.

coreboot can then be programmed with flashrom -p internal:laptop=this_is_not_a_laptop -w ~/coreboot.rom

Laptops, notebooks and netbooks are difficult to support and we
recommend to use the vendor flashing utility. The embedded controller
(EC) in these machines often interacts badly with flashing.
See the manpage and http://www.flashrom.org/Laptops for details.

Power cycling the box will result in text output or garbage depending on if your console speed settings have changed or not, coreboot defaults to the speed of 115200bps, the factory default speed of Alix is 38400bps & the default console speed of FreeBSD is 9600bps.

When attempting to generate a new image with different settings be sure to make clean before starting.
In my image I removed the “PS/2 keyboard init” option from the “Generic Drivers” menu. Still todo is building an image with PXE support, test booting other BSD’s, try different payloads, in particular Open Firmware & generate status data for submission to change board support status on wiki.

Through the previously failed attempt to run coreboot 3 I ended up with a LPC.1a & a POST.5a mini-pci board, the LPC.1a is absolutely essential for testing if you do not have more advanced equipment which would allow you to re-program the flash chip. The LPC.1a is a secondary BIOS chip which can override the onboard the flash, allowing you to boot the system & reprogram the onboard chip again. J2 jumper allows you to select which chip to boot from. When reflashing the chip on the motherboard with flashrom with the LPC.1a inserted (and set to read only), flashrom trashed the image on the onboard chip. Rebooting the system & carefully removing the LPC.1a before re-flashing allowed the process to complete successfully.